EXAMPLES OF HIS TEACHING 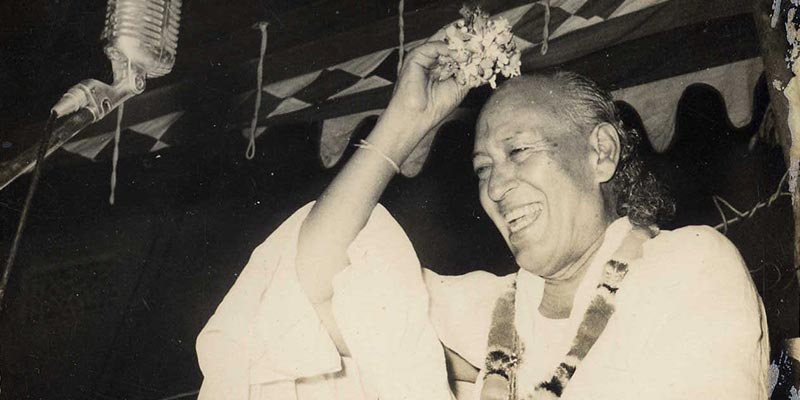 Great teacher of moral and ethical values which he undoubtedly was, Shri Hans Ji Maharaj will be primarily remembered for the practical technique of spiritual freedom which he made available to all, irrespective of caste, color or creed.

He was a staunch opponent of the senseless rites and rituals and the hypocrisy inflicted upon the people in the name of religion, which succeed only in dividing them into warring groups causing much avoidable distress and destruction. The religions of the world as we know them today are a miserable caricature of the original religion, the eternal religion based upon realization of the Holy Word which is within every human being and which transcends the barriers of race and religion, time and space.

Maharaj Ji always used to caution people about getting trapped in a jungle of words with the following story:

Once a man trained a flock of birds how to avoid hunters and traps. He told them that if they saw corn spread on the ground it was only a hunter’s lure, left there to attract them so that they would get caught in his net. Again and again he tutored them in the methods of the hunter, how they were to avoid his corn, how they might escape falling into his trap. Eventually the birds had mastered their lessons, and feeling that they were now able to live a life of freedom and safety, the man released them into the world. The birds sang their lessons again and again: ” We will avoid the corn! We will escape the hunter’s trap! We will stay free and out of harm’s way.” But while so singing, they happened to see some corn on the ground, instinctively alighted upon it and were thus caught by the hunter’s net.

These birds learned what happens when we do not practise what we preach. In the same way scholars and priests may speak of the spiritual path, but if their minds and lives are still entrenched in worldliness then all their theory is worthless as they are not free. Real spirituality is freedom and one who practices it reaps the true reward.

Shri Hans Ji Maharaj worked tirelessly to make people realize the Holy Word, that primordial force linking all humanity together into an indivisible brotherhood. He wanted them to adopt a lifestyle which would be a reflection of the laws of this ultimate Truth. He encouraged them to turn the searchlight of consciousness inward and seek the truth within their own selves.

He naturally extolled the Way of the Word as the birthright of every human being, but was nevertheless keenly aware of the grim realities of life and the appalling poverty and ignorance of the majority of the population. He spent his life campaigning against the iniquitous social and economic injustices of Indian society and the inequalities based on tradition and religion, birth and privilege. That people should be forced to live in a manner little better than animals was an affront to human dignity, and he demanded that the minimum necessities of life should be accessible to all. He decried the extremes of ivory tower seclusion on the one hand and the ruthless pursuit of material pleasures on the other. While some form of steady income is necessary to sustain life, that life itself is truly enriched only when lived in conformity with the spiritual law, or dharma.

Shri Maharaj Ji was very much against caste prejudice and would pounce on those who acted snobbishly because of their caste. In the court of the Lord, he said, it is actions that make a man superior, not his caste. Maharaj Ji would also criticize so-called religious teachers who opposed the opening of the temples to those of the ‘shudra’ caste. He explained that if God; the Purest of the Pure, the Most Holy, the Light of all lights, could be polluted by the touch of a ‘shudra’, then such a God is far less powerful than the ‘shudra’ who worshipped him. A deity who practices discrimination and prejudice is not worthy of our reverence. The name of God is supposed to purify us, but if God is susceptible to pollution by a ‘shudra’, how can he have the power to purify us? It is only the unpollutable who is able to purify. God must be all-pure, and all-purifying, so it is complete nonsense to think such a Power could be contaminated by the touch of a mere mortal, no matter what his caste may be.

Maharaj Ji would often refer to a particular story from the life of Lord Rama. The story depicts Rama’s love for a humble devotee who belonged to a low caste. There lived deep in the forest a ‘shudra’ woman by the name of Bhilni. She served her Guru by sweeping, collecting firewood and doing other domestic duties. So devoted was she, that her Guru upon his death bed called her and said, “Bhilni, have patience and be devoted to Lord Rama and you will be graced with His Presence right in your own home.”

Consequently Bhilni lived in constant anticipation of Lord Rama’s arrival. She would get up in the morning to collect fruit for him, tasting each one to see whether it was sweet enough. She daily swept the route that Lord Rama would have to take in order to arrive at her humble hut. Now, in that forest lived many ‘rishis’ (sages) who had renounced the world, built ashrams and lived a life of meditation and asceticism. Bhilni did not live nearby, for even in the forest all shunned her. They considered her low caste and did not wish to have any contact with her.

The day at last arrived when Lord Rama, on his way through this forest, bypassed all the ashrams and went to Bhilni’s hut. She was overjoyed! All her dreams and expectations had at last been realized and eagerly she put before Lord Rama the bowl of fruits which she had been so long and laboriously collecting. Lord Rama was pleased with her offerings and ate all the fruit. He gave a few to his brother Lakshman, who was amazed that Lord Rama could eat fruit offered by a shudra woman, and surreptitiously threw them away.

In the forest was a single pond, which no longer was a good source of drinking water because it was polluted. The rishis approached Lord Rama and begged him to walk into the water, believing that the pond would be purified upon contact with his feet. Rama replied that they, who were great rishis, purified by years of asceticism in the forest, should be able to purify the water themselves. So they tried, but the pond stayed dirty. Then Lord Rama walked into the water, but he too failed to clean it. At this point Lord Rama called Bhilni, assuring the rishis that if she were to enter the pond the water would become purified. Bhilni entered, and sure enough, the pond became crystal clear and drinking water was restored to the forest inhabitants.

Maharaj Ji would emphasize this story in order to point out that those who considered the lower castes to be polluting were in fact going against the ancient holy books of India and the ideals of Lord Rama himself, and so were destroying the foundations of Indian spirituality.

He would often quote this verse: “Jat pat puchhe na koi, hari ko bhaje so hari ka hoi“, which means: “No one asks about caste in the court of the Lord. One who remembers God in his heart, attains God.”

Just as the sun gives its light to all, and water quenches the thirst of all, so God is one and the same for all. Whoever remembers and searches for Him will find Him. In the words of Jesus, “Knock and it shall be opened, seek and ye shall find.”

Maharaj Ji would always glorify the path of devotion and love. He would say that the devotee is very dear to God, and in fact the intense love of a devotee causes God to incarnate Himself. Lord Krishna refused the delicious feast offered by the prince Duryodhana but enjoyed plain vegetables in the house of a poor devotee. Indian scriptures are full of such stories glorifying the greatness of the devotee. Even Guru Nanak refused a sumptuous meal at the house of a rich merchant to dine in the home of a true devotee who could only offer him a dry crust of bread.

The highest achievement on the spiritual path is the manifestation of Divine Love in the heart of the devotee. Once manifested, God Himself runs after that devotee.

In short, Shri Hans Ji Maharaj was a dynamic personality. His sincerity was so transparent that those who came to scoff would stay to pray. He had pleasant manners and was invincible in his arguments. He was convinced that there is but one Dharma, there is only one God for all. He wanted to demonstrate the basic unity of all religions by constructing a Kalyan Bhawan, a temple of all religions. Should such a Kalyan Bhawan be constructed after his design it will serve as an appropriate monument to his greatness and his contribution to the unity of religions.