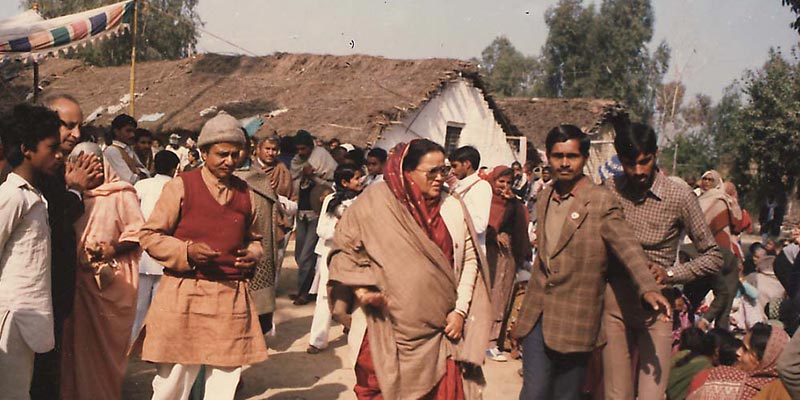 Her kindness and compassion were limitless. She gave refuge to all who sought it, regardless of caste, colour, creed or past actions. There are more than a thousand mahatmas and hundreds of ashram residents to take care of, and all problems came to her, still she managed to maintain a blissful serenity and peace. In her presence, all doubts and problems were forgotten. Being with her was like being a wave on an ocean of peace.

She tried in every way to help a person change his ways and overcome his weaknesses. She believed, “Everyone has faults, but everyone also has the capacity to change himself.”

Her maternal love knew no bounds. As Sarada Devi, the wife of Shri Ramakrishna once said, “When they call me ‘Mother, I forget everything and they get more than they deserve.” Mata Ji’s only wish was that each and every devotee understand the greatness of the Knowledge and evolve in it. She had time for everyone, and everyday a stream of devotees would call on her for darshan and advice. She often used the example of a tree which provides fruit and shade to all, or of a river which freely offers its life-giving water. Once in Canada she was asked, : What religion have you come to spread?” She replied, “I have come to give water to the thirsty. Lectures won’t quench thirst, only water will. I want to give peace of mind to troubled humanity.”

She once said, “To cross a great ocean you need a large ship, not a little boat which may turn over. When the soul and the Holy Name meet, they can cross that greatest of oceans, the ocean of mortality.” To those who thought that merely being initiated is enough, she said, “Don’t postpone meditation until your old age, for you won’t be able to do it effectively then. This is the time for meditation. We must practise and work hard and be very sincere.”

An enlightened seer, she knew the cure for man’s ills. Using homely language, with anecdotes and parables to illustrate a point, she made the deepest esoteric truths understandable. She spoke with the authority of one who knows.

She was a great believer in the power of women. She taught that each woman is an expression of the Divine Mother, the ‘Shakti’, and if women would realize this primordial power within themselves they could change the world. She always emphasized the mother’s role in shaping the child, hence society. A spiritually aware mother will encourage the same attitude in her children. Mata Ji said that the nation that doesn’t give women the place they couldn’t deserve progress.

Mata Ji’s manifestation of this primordial feminine energy was by no means passive. She was a dynamic force, urging oppressed women (especially in India) to realize their inner potential and their latent power to change society. She was a beacon for millions of women, giving them hope and strength, showing the way out of intolerable situations.

She was the embodiment of love, but could be uncompromisingly stern when necessary for a devotee’s own good. She understood the spiritual path thoroughly. She knew what is right and true, and never compromised her ideals. She was prepared to sacrifice everything for Truth and stood firm even if it meant great loss and personal suffering.

So she was the comforter, a spiritual transmitter who freely gave of her infinite mercy, generosity and compassion. Many a weary soul found rest at her feet. The Knowledge she revealed changed the lives of millions of people. She set the guidelines of spiritual behaviour and mapped out the path of self-realization. She was ‘Mother’ for devotees from both East and West, because a mother’s love is the same everywhere.